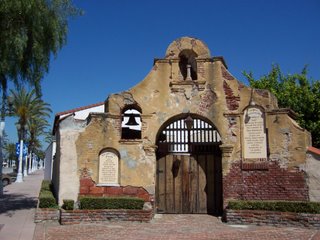 We're on a big nexus of "roads" that lead through early California, called the Royal Highway or El Camino Real. Most of the original route is covered by freeways now, but you can still get from mission to mission and sometimes city to city on paths and bikeways that are more or less faithful to the actual routes the missionaries took.

Last Saturday I retraced a few segments of the old Mission Trail, from the San Gabriel Mission to LA to the San Fernando Mission.

It mostly follows river paths along Arroyo Seco and the Los Angeles River. That makes sense because the "Pueblo" of Los Angeles was founded at the site where these two waterways merge. (Check out the photo). Plus the city was established by people from the San Gabriel mission, which was thriving because of the abundant water supplies.

That's another thing about cars and pavement. Most people think of Los Angeles as a desert, but it was really teaming with shrubs and chaparral. The vegetation and soil acted like a giant sponge that held onto water from the rainy season and slowly released it during the long dry summer.

Today all that water just runs off the pavement into the ocean, taking a lot of trash and oil and other stuff with it. Imagine if enough people traded their cars for bikes, shrinking their concrete footprints. Even if only 5% of us did it, couldn't that allow a lot of parking acreage to return to fields and gardens?

Drop a comment or an email if you want to know the bike route to the missions. Eventually I'll take 3 weeks off and bike the whole Camino Real, from north of San Francisco down into Baja.

Just a question: Does anyone else out there use their bike to study history?

This site uses Akismet to reduce spam. Learn how your comment data is processed.

Get your FREE copy of my travel notes from via Appia

We use cookies to ensure that we give you the best experience on our website. If you continue to use this site we will assume that you are happy with it.Ok