My first job in Italy, my boss gave me a success secret.

She shared it over a bright, neon-yellow liqueur called “limoncino.” (Quick note, in other parts of Italy they call it limoncello.)

I was about to start teaching English to a group of kids in southern Italy, but first the director of the school insisted on sharing the local drink and a gem of wisdom.

The people of Puglia make their own limoncino, using the peels of fresh-picked lemons and the strongest grappa they can find. They serve it in a tall, narrow shot glass that looks like a test tube. These glasses are kept in the freezer, along with the limoncino.

The glass was glazed with frost that stuck to my lips for a second. It was like kissing a snowflake, until I tasted the limoncino.

Imagine a box of the finest high-quality gourmet lemon drops you can find. Now dissolve them in vodka. That’s what limoncino is like.

After my shot, I couldn’t stand up for 10 minutes. Which is good, because the Director of the English School had something to tell me.

“Jacob,” she told me, “we have a story here in Cerignola. When we began construction on our duomo, a Cardinal came here to bless the work. While he was here, he spoke to the common people working in the olive groves and the wheat fields.

When he saw three men building a wall for the duomo, he stopped and asked them what they were doing.

“The first man told the Cardinal, ‘I am laying bricks, Monsignore. It is tiresome work.’

“The Cardinal blessed the worker, saying, ‘May the Lord grant that you never carry a load beyond what you can bear.’

“The second man said, ‘I am earning good silver coins so I can buy a donkey and two goats and give my family a better life.’

“The Cardinal blessed him, ‘May your honest labor bring prosperity to you and your family.’

“Finally the third man put down his trowel. He stood tall and said with great pride, ‘I am building a cathedral for the glory of God and the pleasure of His servants.’

“The Cardinal smiled and said a great prayer for this one, ‘May the Lord give you the power to fulfill the great visions you hold in your heart.’

“Now, Jacob,” she continued, “you have seen the great Duomo we have in the center of Cerignola, the Chiesa del Carmine. It is very big and beautiful for a city as small as ours.

All the men in our story worked on this cathedral, but only one of them understood the importance of his labor.

“A few weeks after the Cardinal’s visit, this third man was pulled aside by one of the engineers. The engineer began to teach him the basic principles of construction.

“Soon he was directing small groups of men in their labor. He earned more money, and was able to go to Naples to study.

“By the time this young man was 35, he was a well-known architect. Important people hired him to oversee the construction of roads, bridges and palaces all over Puglia.

“Do you see, Jacob? All of this happened because he understood that his work was important. Never forget this. Even when you are just teaching children to say ‘Hello’ in English, you are building a cathedral for someone.”

This story has stayed with me over the years, and now I pass it on to you because you should always regard your work as important. You don’t need to be blessed by a Cardinal.

When you think about the importance of your work, when you care deeply about the results, you will show up every day full of passion and ready to give 100%.

Do this enough, and you can build a cathedral.

By the way, this story is why I'm writing a book about misadventures along the via Appia.  I'm planning to release it in the second half of 2018, but I could use your help.

You see, I want to offer my favorite readers some incentives for buying my book. I wish I could just give you an all-expense-paid trip to southern Italy. But I'm basically a starving writer, so that's not possible right now.

Instead, what would you like to have as a special bonus? I'm open to almost any ideas. Leave your suggestions in the comments, below.

This story hides a secret to productivity. And it may also be one of the best examples of fiscal responsibility in the history of western civilization.

If you’re ever in Rome, you’ll probably (hopefully) visit the ruins of the Roman Forum.

There, you’ll see a well-preserved temple dedicated to Antoninus Pius and his wife Faustina. Near the top of the temple you’ll see two lines inscribed in travertine marble:

The story goes that the emperor, Antoninus Pius, deeply loved his wife. When she died, he asked the Senate to make her a goddess, and he built a lavish temple in her honor.

He spared no expense. You can still see the marks left on the pillars by looters who tried to steal the rare cippoline marble.

But they couldn't tear the building down.

In fact, the temple was built so well that it survived through the centuries and was even made into a church. The church was dedicated to San Lorenzo, who may have been martyred on the alter at the base of the temple.

But I'm getting off topic.

On the front of the temple, Antoninus Pius carved the first dedication, “Divae Faustinae Ex S.C.” This means “The Goddess Faustina by Senatorial Decree.” 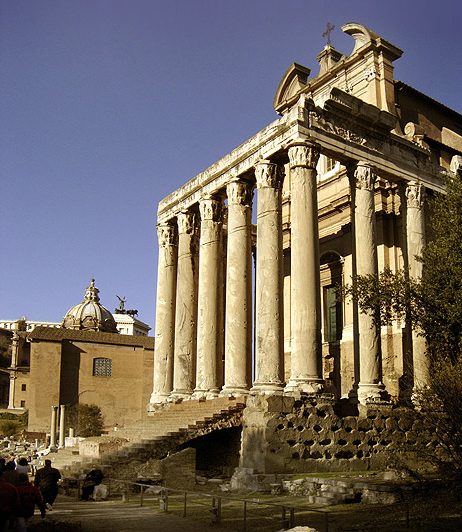 Some years later, when Antoninus passed away, the Senate was left with the burden of making him a god just like his wife. Her temple had been costly, and the emperor’s own temple would have to be its equal or better.

But then someone had a brilliant idea.

Instead of building a new temple, they simply added a new inscription above the old one: “Divo Antonino et.” The translation: “The God Antoninus and.”

The God Antoninus and
The Goddess Faustina by Senatorial Decree

The immortal emperor and empress are together for all eternity, while the Roman taxpayers were spared the cost of shiploads of marble and thousands of man-hours of labor. Everyone was happy, except the family who owned the marble quarries.

Build your house with bricks

There’s a lesson here, and it’s not about finding ways to cheap out.

If the Romans had build Faustina a cheap temple, Antoninus would have required a new, better temple.

In other words, this money-saving trick never could have worked if the original temple hadn’t been built as well as it was.

So, the real lesson: If you do something really well, it’s easily worth twice as much as if you do an “okay” job. Spend more time, money, effort up front and you’ll ultimately get twice as much done in half the time at half the price.

Whatever you do in 2018, challenge yourself to make it bigger and better than it needs to be.